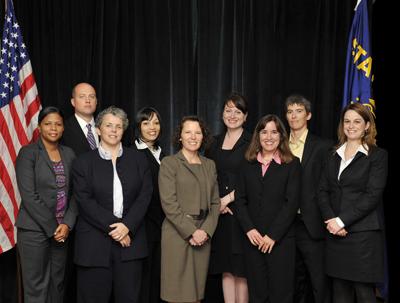 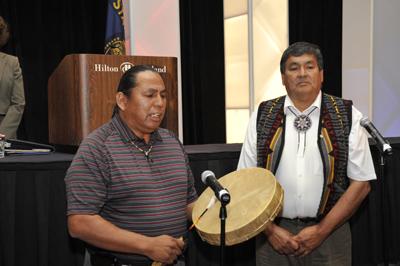 The 2010 National Symposium on Sex Offender Management and Accountability was held May 18-20, in Portland, Oregon. The Symposium provided jurisdictional representatives with advanced training to assist in their work towards implementation of the Sex Offender Registration and Notification Act (SORNA), and offered nationally-recognized expert speakers and panel presentations in various areas of sex offender management and accountability.

The 142nd Fighter Wing International Guard began the 2010 Symposium's Opening Ceremonies by carrying the Colors to the podium as more than 600 law enforcement, social workers, probation officers, tribal representatives and attorneys from all over the United States looked on. The ceremony continued with singers from The Clackamas Elementary School Choir, The Oak Grove Elementary School Choir, and Representatives of the Confederated Tribes of the Umatilla Indian Reservation. Remarks were delivered by Linda Baldwin, Director of the SMART Office, and Mary Lou Leary, Deputy Assistant Attorney General for the Office of Justice Programs. In addition, there was a video address by John Walsh, host of America's Most Wanted. The first day of the Symposium concluded with a discussion of comprehensive approaches to sex offender management, as well as a presentation on the sex offender tracking efforts of the U.S. Marshal Service, the Sex Offender Tracking Team at the National Center for Missing and Exploited Children, and the United States National Central Bureau of Interpol.

The second day of the conference included breakout sessions contained in three tracks: Comprehensive Approaches to Sex Offender Management, Indian Country, and Policy and other Considerations. Some sessions covered the information-sharing resources necessary for SORNA implementation. Other sessions included information and discussion on sex offender management, including law enforcement, supervision, and treatment provider roles, as well as juvenile and victim considerations. There were presentations on current research on offender registration and forensic interviewing of child sex offender victims in Indian Country. In addition, the second day featured a keynote presentation by Erin Runnion, surviving parent and founder of the Joyful Child Foundation-established in 2002 after the abduction, molestation and murder of her five-year-old daughter, Samantha Runnion-a great force in the movement to empower children, families, and communities against would-be abductors and sex offenders.

To end the symposium, Dr. Veronique Valliere, a clinical psychologist who works with sex offenders, gave two presentations, "Understanding Sexual Offenders" and "Deception and Detection," that helped attendees develop an understanding of sexual offense dynamics as well as the skills needed to identify deception by sex offenders. Dwight C. Holton, Interim United States Attorney for Oregon, delivered closing remarks focusing on the successful prosecutions under SORNA in his jurisdiction.

The symposium attendees received numerous practical resources and presentations throughout the week. As Mary Lou Leary, the Deputy Assistant Attorney General noted, "By communicating, working together, and sharing information, we are laying the groundwork for a seamless web of registered sex offender information."