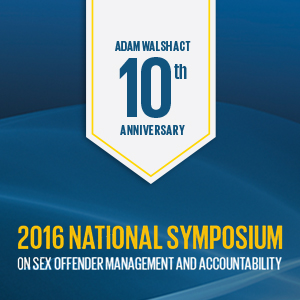 It's been a decade since the passage of the Adam Walsh Child Protection and Safety Act of 2006, enacted in memory of the 6-year-old boy whose brutal murder brought national attention to the dangers posed by child predators and other violent offenders.

We've come a long way over those 10 years in meeting the complex challenges of sex offender management and building a comprehensive sex offender registration and notification system.

From July 26-27, I was happy to welcome more than 650 law enforcement personnel, probation officers, tribal representatives, prosecutors, and others, to the 2016 National Symposium on Sex Offender Management and Accountability in Kansas City, Missouri.

This event brought together professionals from around the country who are working on sex offender registration and management issues to exchange ideas, learn about new tools and projects, and network with others in the field.

We commemorated the 10th anniversary of the Adam Walsh Act and recognized the progress that has been made in the field since this important legislation was passed.

The Adam Walsh Act established baseline standards for sex offender registration and notification systems and expanded the range of offenses those systems must address. It also included tribes along with states and territories as jurisdictions responsible for managing sex offenders. Finally, it established the Office of Sex Offender Sentencing, Monitoring, Apprehending, Registering, and Tracking (SMART Office), the first federal office devoted solely to activities related to sex offender management.

The SMART Office has also supported professionals through training and other forms of assistance.

At the symposium, we were happy to announce that the new Attorney General Guidelines for Juvenile Registration under SORNA had been finalized. These guidelines recognize the various approaches in managing juvenile offenders, from registration provisions to policies and practices related to prosecuting juveniles as adults for serious sex offenses. These guidelines also give the SMART Office greater flexibility to assess a jurisdiction's substantial implementation of SORNA's juvenile registration requirement.

We were thrilled to hear from a number of influential voices in the field. Callahan Walsh, the brother of Adam Walsh, spoke to attendees, as did Assistant Attorney General Karol Mason, who oversees the Office of Justice Programs. David Harlow, Deputy Director of the United States Marshals Service, also addressed the symposium.

I'm proud that we highlighted the Sex Offender Management Assessment and Planning Initiative (SOMAPI) in detail throughout this event.

SOMAPI banks vital information that can serve the ends of policymakers, storing research that shows, for example, the disparity between observed and actual rates of recidivism among sexual offenders and the value of cognitive behavioral approaches to reducing sex offending.

During the symposium, we were able to discuss the progress made through SOMAPI, including the project's components, products, and efforts to disseminate research findings to the field.

Subject-matter experts who conducted reviews of the scientific evidence and authored SOMAPI reports participated in a moderated discussion on their work. This session highlighted the importance of aligning policy and practice with scientific evidence about what works, as well as key considerations for interpreting research findings on sexual offenders and sex offender management practices.

In one session, SMART grantees described their efforts to design and implement strategies to prevent sexual violence on campuses and universities. Here, attendees learned about situational prevention approaches, such as positive bystander behaviors and changing social norms, to curb sexual violence. Then, they heard details of a new program designed to assess and provide therapeutic interventions for perpetrators of sexual violence on campus.

This symposium was a productive exchange of information and a fitting way to cap the 10th anniversary of the Adam Walsh Act. I look forward to seeing the progress that attendees will make in their jurisdictions with the information they received in Kansas City.

For further updates on SMART and from the field, please follow our newsletter, the SMART Watch Dispatch or subscribe for our email updates.