As many recent high school graduates begin preparing to leave for college, they and their parents are likely thinking about on-campus safety. Specifically, they might have questions about their prospective school's efforts to prevent sexual assault on campus. Media coverage focusing on trends in sexual assault and thematic issues like victim-blaming has heightened awareness of this problem. And research continues to reveal the extent to which sexual assault affects the lives of college students. According to a study published in the Journal of American College Health, 20 percent of women on college campuses experience some form of sexual assault. A separate study funded by the National Institute of Justice found that 6 percent of college men experienced sexual assault. 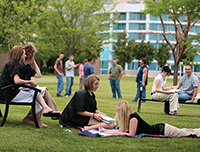 Research is also emerging about the proclivity of men to perpetrate sexual assault on college campuses. Studies published in several academic journals — including Journal of Consulting and Clinical Psychology, Violence and Victims and JAMA Pediatrics — indicate that between 6 and 13 percent of college men disclosed that they had committed or attempted rape or sexual assault. To those who work to prevent these crimes, these statistics are revealing. They underscore why raising awareness around the dangers of campus sexual assault is so important. Any effort to prevent sexual assault on campuses should include an understanding of these statistics and incorporate strategies to address first-time perpetration, including efforts to identify contributing behaviors before anyone is harmed.

The Sex Offender Management Assessment and Planning Initiative (SOMAPI), managed by the Office of Sex Offender Sentencing, Monitoring, Apprehending, Registering, and Tracking (SMART), summarizes what we know about those who commit sexual offenses and evaluates ways to prevent future offenses.

The SMART Office has begun to address college campus safety through several campus-based sexual assault prevention initiatives. One of these projects targets perpetrators during the sanctioning phase of the student disciplinary process using research-based interventions, such as risk assessment and treatment — which has been shown to effectively reduce sex offender recidivism rates in other non-campus contexts — to stop further perpetration. This project targets behaviors in college students after they have been found responsible for sexual misconduct.

The SMART Office is also funding two projects that examine ways to prevent the perpetration of sexual assault on campuses through situational prevention. This approach involves identifying factors in the campus environment that increase the potential for perpetration of sexual assault and tailoring campus-specific solutions to address identified risks. It examines environmental dynamics, high-risk situations, routines and daily activities by those at risk to abuse or be abused, as well as policies and norms that establish a climate of safety or risk, in order to create a safer environment for students. For example, research shows that an increase in alcohol prices can decrease the level of drinking on campus. Additionally, when campuses have amnesty policies, student victims are more likely to report sexual assault, which may in turn deter some perpetrators who use alcohol to facilitate rape. These sexual assault prevention strategies complement existing campus educational programs, such as bystander interventions, which teach students the skills to intervene to interrupt behaviors and disrupt potentially dangerous situations.

The SMART Office also supports two fellowships focused on preventing and responding to campus sexual assault. One is identifying ways to focus campus prevention efforts on preventing the perpetration of sexual assault including approaches to assess the prevalence of perpetration. Another explores how campuses share information between community partners, other campuses and law enforcement about individuals who have engaged in harmful sexual behaviors.

These SMART Office initiatives augment other federal prevention efforts. For instance, the National Institute of Justice is researching how colleges and universities investigate and adjudicate sexual assault cases. NIJ is also collaborating with the Centers for Disease Control and Prevention and the Office on Violence Against Women (OVW) to tailor the Bureau of Justice Statistics' campus climate surveys to historically black colleges and universities. Additionally, the Bureau of Justice Assistance funds the National Center for Campus Public Safety, a clearinghouse for resources and initiatives that support safer and stronger campus communities. And our partners at OVW provide funding to colleges and universities that helps train more than 17,000 people a year on responding to domestic and sexual violence and serve more than 900 campus victims every six months.

We believe these efforts will ultimately make colleges and universities safer for incoming students and campus communities nationwide.