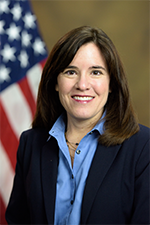 Dawn Doran serves as the acting Director of the SMART Office for the U.S. Department of Justice, Office of Justice Programs. Ms. Doran’s responsibilities include working with the staff and federal partners to administer the standards for the Sex Offender Registration and Notification Act (SORNA) for the 50 states, five principal U.S. territories, the District of Columbia and approximately 170 federally recognized tribes. Ms. Doran also provides training and technical assistance on matters related to sex offender registration, notification and other sex offender management issues to the SORNA jurisdictions as well as to national, state and local government entities and advocacy organizations.

Prior to joining the SMART Office in 2008, Ms. Doran served as the Deputy Director of the National District Attorneys Association's (NDAA) Child Abuse Programs, including the National Center for Prosecution of Child Abuse in Alexandria, Virginia, and the National Child Protection Training Center in Winona, Minnesota. In this capacity, she managed and supervised activities and operations of the two Centers and their staffs; provided training and technical assistance to prosecutors, law enforcement, child protection workers, social workers, medical personnel and other allied criminal justice professionals engaged in the investigation and prosecution of child abuse, neglect and exploitation cases; and authored or contributed to numerous child abuse publications, among them the “Investigation and Prosecution of Child Abuse,” Third Edition. Ms. Doran also worked extensively with the media on child abuse issues.

Ms. Doran formerly served NDAA as Interim Program Manager of the National Juvenile Justice Prosecution Center, where she oversaw the development of the first Jumpstart resource training manual for newly assigned juvenile prosecutors. She also served as the Senior Attorney and Acting Director of the National Traffic Law Center, where she was responsible for creating a new program entitled Protecting Lives, Saving Futures.

Prior to her service at NDAA, Ms. Doran was an Assistant District Attorney General in Memphis, Tennessee, where she tried a wide variety of cases, up to and including capital litigation. She served as co-chairman of the Sex Offenders Registry Violation Unit and was a member of the Domestic Violence Unit, the Child Physical and Sexual Abuse Warrant Review Unit, and the Child Fatality Review Team. Additionally, she served as the district attorney liaison to the Citizens Crime Commission.